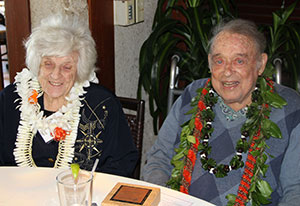 It’s funny how influential a professor can be. From the office of the doctoral program director at Berkeley in the 1960s, the young Ph.D. candidate Arthur Stonehill was told that his MBA from Harvard Business School had put him in a fine position to lead a business, but left him a bit of a laggard in economics theory. The professor recommended that Stonehill take time away from the program in order broaden his knowledge.

No stranger to the world, Stonehill headed to the economics department at the University of Olso in Norway. He brushed up on economic theory and, as chance would have it, studied under two professors who would both go on to Nobel prize-winning economists.

His dissertation, “Foreign Ownership in Norwegian Industry,” contemporaneously changed government policy in Norway and became the benchmark for government officials, student and researchers. The thesis provided the foundation for the textbook he co-authored – “The Fundamentals of Multinational Finance” – its sixth edition in use today.

He returned to a teaching position at Berkeley. He returned with a wife, two children, a third on the way.

However, when in 1966 Oregon State University offered him the opportunity to start an international business major, Stonehill decided the rural setting would be ideal for his Norwegian stepdaughter who yearned for horses.

And, thus, Oregon State landed one of the godfathers of the academic discipline of international business, one of an initial 200 academics who contributed to the globally developing body of knowledge.

It’s funny how influential a professor can be – life changing, in fact. Stonehill founded the College of Business’ international exchange program. In the program’s three decades, more than 1,400 business students have traveled the world returning home with the same key refrain, “that was an experience beyond compare.”

Stonehill’s reputation brought opportunity and prestige to the university, and the travel program that now bears his name is his legacy at the College of Business. He has worked to assure that scholarships will continue to be available for those students. He has inspired those around him to support the program, and open doors at universities across the continents.

In a life lived well and filled with prestigious accomplishments, Emeritus Professor Arthur Stonehill – the adventurer, teacher, researcher, mentor and leader – is honored for his extraordinary service and support to the OSU College of Business and its students with the 2018 Distinguished Service Award.

Things could have not gone better for industrial engineer Randy Conrads when he landed a job at Boeing right after graduation. It’s a path that engineers, even today, aspire to achieve, and the 1972 OSU graduate stayed safely right there at Boeing for more than two decades.

“I liked the work; I advanced. I met great people,” Conrads said. “But I started thinking that there’s got to be something I could do that would let me be in control of my decisions and my life, and not someone else deciding if I can move ahead or not.”

Conrads’ existential crisis, occurring not long after he and his wife had returned from high school reunions, also coincided with the mid-1990s early commercialization of the internet. The “World Wide Web” was just getting started.

Conrads had been tinkering with the things of the internet on an early configuration PC he'd bought for his teenage son in his own spare time. He attended an international internet conference – the second one ever of its ilk – where the founders of Yahoo were named "Best new thing on the 'Net.' The buzz in the air was that venture capital was on its way to the sector. (And so things would really start happening…)

After the conference, Conrads went home and said to his wife, Sharon: "You know, I think I can make a living on this internet thing. But I am going to have to do it full time. Could we try six months?”

She said okay, and The Conradses put it on the line: a 21-year career with stock options, medical benefits, four weeks of paid vacation, a pay check.

Classmates.com, an “almost Facebook” community of subscribers who took to the site to reconnect with their long-lost high school friends, was born.

Before Classmates became one of the world’s largest online communities with nearly 40 million registered users; before the site was named one of the hottest internet properties on the web with two million visitors a day; before Classmates’ monetization model survived the dotcom bubble bust of the early 00s; before Classmates sold in 2004 for $100 million – Randy Conrads and his wife were in the basement running an internet startup.

It took much longer than six months.

“It just wasn’t the kind of fast growth that people think they saw; it took a long time,” Conrads said. “I thought we would be large when we hit 100,000 people, but it took millions of people.” It also took money from friends and family, a dip into retirement savings, some venture capital, and a huge commitment and side-by-side work from his wife.

The College of Business honors Randy Conrads with the 2018 Weatherford Distinguished Entrepreneur Award to celebrate his entrepreneurial spirit and vision, and his continued adventures as an internet entrepreneur.