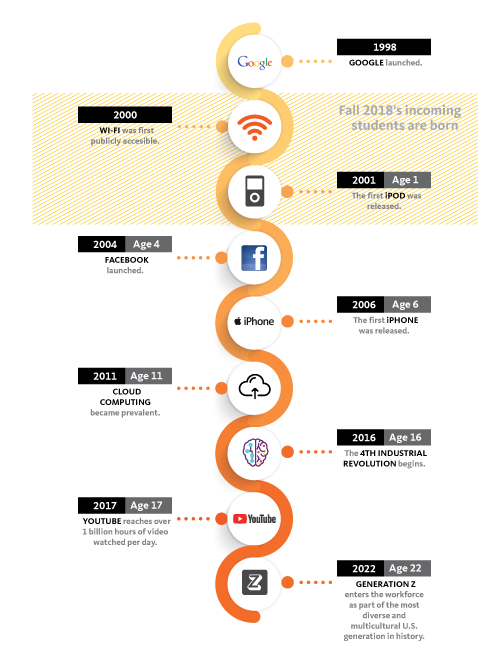 They’re born in the zeroes. They’re the pivotals, the digital natives, Gen Z. And as usual there’s a range of labels and insights as the children of the third millennium reach Austin Hall for their college adventure.

Are we wired into their needs? We think so. Here’s a few of our thoughts.

In very broad strokes, market researchers have tagged this generation as financially cautious, having seen the 2007 economic downturn impact their families. They are also cautious socially, cultivating an image on social channels that precisely reflects a persona they want the world to see. Gen Zers are more like their grandparents in terms of work ethic. They work hard, but hold onto a few radical and non-conformist views. They are old souls in a new world.

Consider this: here is a generation born with broadband internet. Wifi is ubiquitous; it always has been. Youtubers influence them more than mainstream news. They’ll likely never have a newspaper delivered to their dwelling, or perhaps not a cable TV package on their own dime.

And they are emerging in a world of even more rapid change and uncertainty. College of Business Dean Mitzi Montoya sees a certain amount of concern for the future among this generation.

“They’re challenged with a very ambiguous future, more so than has ever been the case,” Montoya said. “Everyone is saying it, and all the data prove it – the future is getting less, not more, predictable. This adds a bit of nervousness and cautiousness about future among this generation that we haven’t seen before.”

Professor Klaus Schwab, founder and executive chairman of the World Economic Forum, calls this era the “Fourth Industrial Revolution,” a climate where only the most nimble companies will survive, and only the workers who constantly re-tool their skills will continue to find jobs.

The potential impact of artificial intelligence and automation of the workforce is a mainstream concept. “I think a tipping point has happened,” said Roger Graham, professor of accounting. “We’ve all seen so much that we hardly notice that we’ve seen so much.”

Graham says all academic disciplines are reacting. For example, in accounting where many jobs were long ago replaced by a computer, students now have to be analytical and strategic contributors to business decision-making.

Graham says that this generation may be the ones with the skills to come up with solutions within new situations. “Their whole lives they’re collecting all this different data, and they are uniquely qualified to go into the future and think critically,” he said.

Sandy Neubaum, director of student engagement at the college, also has faith that Gen Z is vested in the future. Neubaum says Gen Z are not getting enough credit for their worldly outlook, for their desire to pursue careers that “make a difference,” and their drive to succeed. She cites an uptick in high-achieving students and the runaway success of the first-year entrepreneurs.

“Our first-year micro-enterprise business owners netted $32,000 in profits last academic year. If they can do this when they’re 18, imagine what they’ll be doing when they’re 25,” Neubaum said.

The College of Business has made great efforts and programmatic overhauls to prepare students with academic knowledge and professional skills, and to transform the learning experience with active engagement, hands-on learning and real-world opportunities. We are bringing learning wherever it’s needed – or demanded.

According to Montoya, the time when university was only for the rich and elite is long gone. The land grant mission and the advent of the public university changed that. Montoya says the internet is pushing a third tectonic shift. The imperative now is for universities to embrace the demands of the digital nomad students and career professionals alike – for personalized, on-demand learning. “We’re at another inflection point, a new stage of optimizing how to effectively use technology to facilitate learning.”

Klotz developed his course materials into hybrid learning modules. He recorded podcasts, reducing the lecture-based learning time. He admits his surprise that students adapt to this format.

“I’ve been impressed by these students’ flexible learning style. I still use the same exams that I used in the traditional course format, so I know they’re absorbing the information.” Klotz said.

In the era of new access, we're ready for Gen Z, and whomever else demands the knowledge.