Fashion Forward: Design student takes a bite out of the Big Apple

Design student takes a bite out of the Big Apple 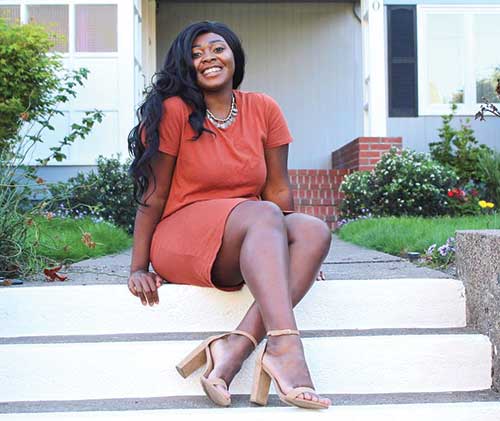 Career success takes focus, talent, education, strategic decisions and hard work – but sometimes, bringing all of these assets to the right place at the right time leads to a perfect breakthrough.

Kristy Milien ’18 had such a breakthrough experience. Milien served as founding president of the National Retail Federation student club, writing the club constitution and helping drive the launch of the new group last year. One of her signature accomplishments through the group was organizing a student trip to the retail industry’s biggest event in New York City, The Big Show.

The Big Show is the world’s largest retail conference, attracting a global audience and exhibitors and showcasing the most exciting ideas in retail.

However, for Milien, something else happened there. “The minute we landed in New York and drove to the city, I knew I had to live there,” Milien said. “That’s why at the Big Show I networked as much as I could to make sure I got a job in New York.”

Milien is a first-generation, Haitian-American woman from Boise, Idaho, who’s had high hopes and dreams  since she set foot on campus as a high-school junior and decided that the merchandizing management program was right for her.

After that experience launching the club, Milien says her greatest skill is successful leadership in dynamic situations.

Milien navigated the hectic recruitment scene in New York, emailed follow-ups to recruiters, and then survived rounds of phone interviews, virtual interviews, online profiling surveys and a two-day in-person interview. She landed her dream job with an iconic brand on one of the world’s brightest global fashion and retail stages.

Milien joins Macy’s in New York for its 2018 Store Management Executive Development Program. She’ll be trained on all aspects of executive management over multiple years, and then start as a district manager at a Macy’s New York location.

“Within my degree, I learned about consumer behavior, management, business and much more,” Milien said. “I had to use that analytical skill set in the two-day intensive interview I had with Macy’s. The interviews were difficult, but after the years of professional development at the college, I was ready for anything. Now I am leaving this school with such an amazing opportunity.”