Seeing the need and meeting it

As the ninth of 11 children growing up in Tillamook, Oregon, Patty (White) Bedient ’75 didn’t have many opportunities to be philanthropic.

“Money was tight in a family of 11 children,” she said. “It was never certain I was going to attend college, and I really appreciated the opportunity.”

The valedictorian of her high school class, Bedient made it to OSU because of scholarship support and her own hard work.

In addition to her academic studies, OSU also gave Bedient the opportunity to get involved in many organizations. She served as president of her sophomore class service organization, the Talons and Beta Alpha Psi, the accounting honorary, among others. She also joined Alpha Phi sorority, serving as treasurer and then as president.

These experiences left an indelible impression on Bedient, and gave her a foundation for the leadership positions she held throughout her career at Arthur Andersen and Weyerhaeuser. In addition to OSU’s Board of Trustees, she also sits on a number of corporate and non-profit boards and councils, including College of Business Dean’s Council of Excellence.

Bedient wants everyone to have that chance, especially people for whom college seems out of reach. That’s why she and her husband, Ron, have donated $100,000 to help fund the new Business Leaders Scholars Program in the College of Business.

“I think that in many ways education — especially higher education — provides returns for a lifetime. It’s one of the best investments we can make for underrepresented and underserved populations. It helps that individual, but it also gives that individual an opportunity to contribute to society throughout their life in ways they may not otherwise have had,” she said.

One of the best and most innovative aspects of the Business Leaders Scholars Program is how far it goes beyond a four-year scholarship. The program provides “wraparound services,” which include an upper-class peer mentor, a professional mentor, academic and personal check-ins by the college’s support teams, a ‘paying for college’ meeting with an advisor from the college’s Center for Advancing Financial Education (CAFE), and career guidance starting in the first year. Students in this program are also offered a work-study job within the college.

The goal is to build a strong foundation for students who need it most, whether they are the first in their families to go to college, or struggling economically or socially. 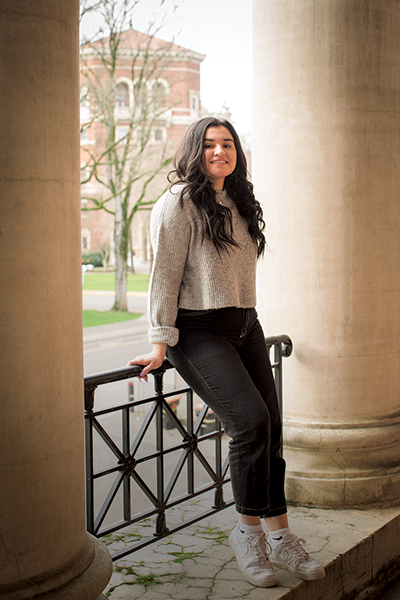 “We were starting to see that our most vulnerable students weren’t able to stay at OSU at the rates we hoped they would. A scholarship in and of itself was sometimes insufficient for these populations,” said Associate Dean for Undergraduate Student Development Prem Mathew. “It’s our job at the college and as a land grant university to provide access and ongoing support to all students throughout Oregon and beyond. We knew that we had the power to do something about it.”

When Mathew talked to her about the program, Bedient was immediately intrigued. After all, it was donors’ philanthropy that gave her the opportunity to attend OSU, and she’d long been dedicated to the college’s development.

“As we look around the college and the state for what’s needed — and I love OSU’s mission to the state — I see the program as a way to empower people. That’s why I was drawn to it. As Associate Dean Mathew described what he was trying to accomplish, the idea of supporting it became exciting,” Bedient said.

Although the first students to be invited into the Business Leaders Scholars Program won’t start at OSU until fall 2021, the College of Business has already begun providing wraparound services for students in need.

Angie Coreas Aviles is one of them. A first-year, Aviles is the first in her family to go to college. The resources the college offered her — employment, connections and scholarships — were pivotal to her choosing Oregon State. The beautiful campus didn’t hurt, either.

“I won’t have to take out loans for my four years here,” Aviles said. “This support means I can focus on my academic goals and put my best foot forward during this journey. I look forward to doing great things at OSU to show my appreciation.”

The hope, according to Mathew, is that the Business Leaders Scholars will invite 30 to 50 new College of Business students each year, with the opportunity to increase that number as needed.

“We are excited to grow this program and be at the forefront for what business schools can do in the region and nationwide,” said Mathew.

“We are incredibly grateful to donors like Patty and Ron for helping us gain momentum in such a critical area.”

The Bedients’ greatest wish is for others to be inspired by their giving. “We’re hoping to engage more donors to the program, and to give this opportunity to as many students as possible,” Bedient said. “One of the things we like most is that we’re not just getting people to the university, we’re supporting them throughout in the hopes that they achieve success in their own endeavors and pay it forward — there will always be a need we can meet.”

A way to empower people

As we look around the college and the state for what’s needed — and I love OSU’s mission to the state — I see the program as a way to empower people. That’s why I was drawn to it.

Would you like to learn more about making a meaningful impact through the Business Leaders Scholars Program? Contact:
Anne Murphy
Senior Director of Development
Division of Business and Engineering
Oregon State University Foundation
anne.murphy@osufoundation.org
541-760-7196