You could say the Pacific Northwest is known for exceptional quality craftsmanship and epic-tasting food and beverages.

Take Oregon wine. The state produces just 1% of the nation’s wine. But Oregon wines are 20% of the highest-rated wines in the country. And Oregon beer is a premium product on an international scale.

“This is Oregon,” said Chuck Toombs, College of Business instructor and founder of DulsEnergy, the company growing the famously tasty seaweed. “We’re really good at food and beverage.”

At the College of Business we’re really good at championing the business of food and beverage by preparing the workforce, bolstering brands and researching business solutions. We partner with leading food and beverage companies, including Allrecipes, the world’s largest digital food brand; E&J Gallo Winery, a leader in the U.S. wine industry; Peet’s Coffee, a committed and conscientious specialty coffee company; and the popular Pacific Northwest restaurant chain Burgerville to mention just a few.

Because ‘first we eat. Then we do everything else.’

Through our undergraduate and graduate programs and continuing and professional education, the College of Business educates and trains many of these workers and future business owners. As we seek to expand the food and beverage industry into new markets, we take a look at our community of educators and alumni who are doing their part to elevate the industry in this state and beyond.

The College of Business has long used student projects to glean insights and propose business solutions. When Dann Cutter, B.S. ‘13, MBA ‘18 was an undergraduate studying finance in the Honors College, his thesis advisor handed him an opportunity that resonates still — the chance to work with McMenamins on a distribution model for their beer. 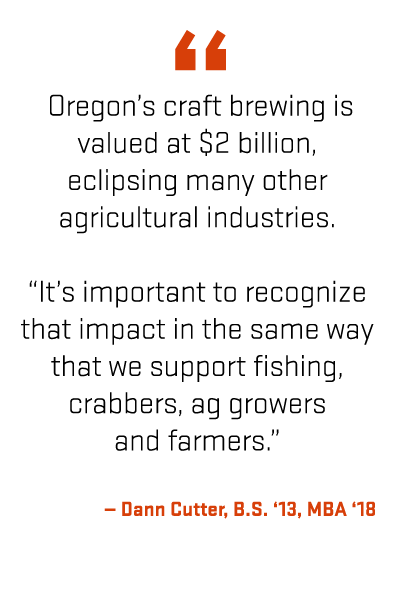 It was such a meaningful project that when it came time for Cutter to select a capstone project for his MBA in organizational leadership, he selected one with ties to Oregon’s craft breweries. He hopes the “Mid Coast Ale Trail” will help to keep business growing at central Coast breweries.

Cutter borrowed the concept used by tourism agencies in other regions to promote craft breweries. Essentially, the Mid Coast Ale Trail is a marketing promotion to encourage people to visit establishments by collecting stamps to earn a prize.

Cutter did the legwork recruiting breweries from Yachats to Lincoln City, honed the elevator pitch and developed the project to be funding-ready.

Cutter is the director of information technology services at Hatfield Marine Sciences Center in Newport and has lived in the area for 23 years. Familiar with area breweries as a customer, he’s also the Mayor of Waldport, a past city councilman and board chairman of Cascades West Economic Development District that promotes regional projects.

Through his civic involvement, Cutter knows how big an economic impact Oregon’s craft brewing makes. With more than $2 billion in economic impact alone, it eclipses many of the state’s other agricultural industries. Oregon consistently leads the country in the number of breweries per capita, the percentage of dollars spent on craft beer and the economic impact per capita by breweries.

“It’s important to recognize that impact in the same way that we support fishing, crabbers, ag growers and farmers,” Cutter said.

With his MBA complete, he’s ready to do what his advisor did for him: hand the Mid Coast Ale Trail project off to a group of students looking for a thesis project.

“There is a lot of work associated with this,” he said. “It’s going to be nice to be able to tap into an opportunity to really make an impact for students headed into the workforce.”

Teaching what we practice 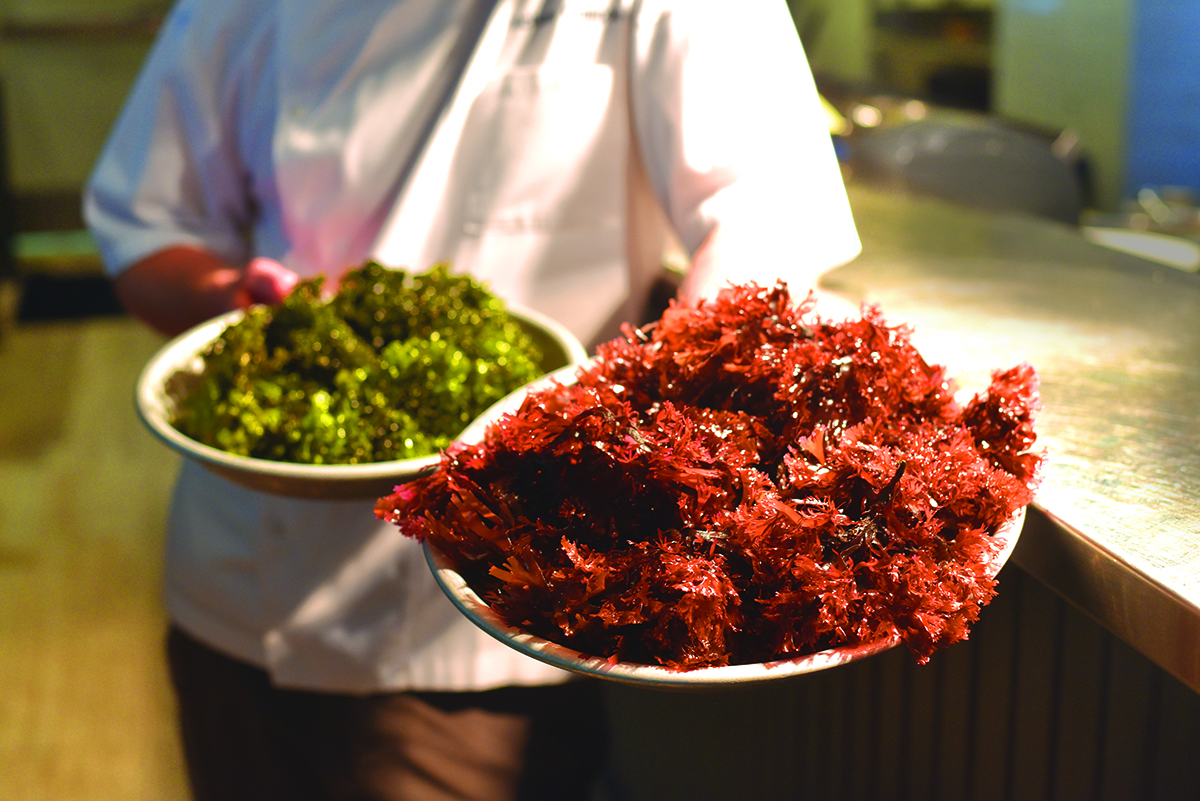 A strength of the College of Business is its ties to the business community, including instructors with real-world experience, like Nathan Warren and instructor Toombs. Warren is the founder of Harris Bridge Vineyard in Philomath, Oregon, and teaches corporate finance. Toombs brings industry experience in marketing, advertising and retail management to DulsEnergy.

Until recently, dulse was a little known commodity. The native cold-water seaweed was developed and patented at Oregon State 15 years ago. Dulse Energy operates a tank farm growing dulse in Bandon, Oregon, and another farm is coming online in Garibaldi, Oregon. The independent company pays royalties to the university based on the volume of fresh seaweed produced.

When dulse captured headlines in 2015 for its flavor that some people liken to bacon, the market for dulse expanded domestically and internationally. People are discovering a taste for this fresh seaweed, especially in the Pacific Rim. And DulsEnergy is modeling how to produce it.

“This is our first season of just trying to figure it out,” Toombs said. He anticipates the initial harvest will be 100,000 pounds. “Customers enjoy the product.”

Dulse is also an ingredient in nutraceuticals, makeup and pet food. DulsEnergy has discovered a “premium” market for fresh dulse where none existed before.

Oregon State’s transdisciplinary approach with industry is developing the market for dulse. With just one patent application, the College of Business is returning value and bringing world-wide attention. Dulse could soon be even larger than Oregon’s wine industry, Toombs predicts.

“The potential economic boom for Oregon is huge,” he said. “We’re building the Oregon brand for something the world wants.”

The cooperative and innovative relationship between the College of Business and the food and beverage industry is a model with the potential to be replicated with other commodities.

At a time when the average lifespan of a Fortune 500 company is less than 20 years, the College of Business gives students the tools to create sustainable, socially conscious businesses.

Instructor Warren relies on his experience working with the ancient process of winemaking to share insights on how businesses can remain sustainable for generations. When a business prioritizes a sustainable community mindset while balancing between its economic purpose and scientific awareness, Warren defines this as “conscious community theory of organizational function.”

“Conscious community theory explains how some wine brands and companies have been in business for centuries, with some lasting even longer than the economic and political systems that they participate in,” Warren said.

Many of Oregon’s food and beverage businesses operate according to these principles, Warren said.

“When natural resources are involved, there is almost always a delicate balance between economic purpose, scientific awareness and impact to the community,” Warren said.

He teaches this balanced, environmentally and socially conscious approach to business in his corporate finance classes, drawing on nearly 20 years of professional experience as the founder and owner of a small winery in Philomath, Oregon.

“The community focus and scientific awareness of our natural resource industries can teach us about how to live in balance with the planet that our communities depend on,” he said. 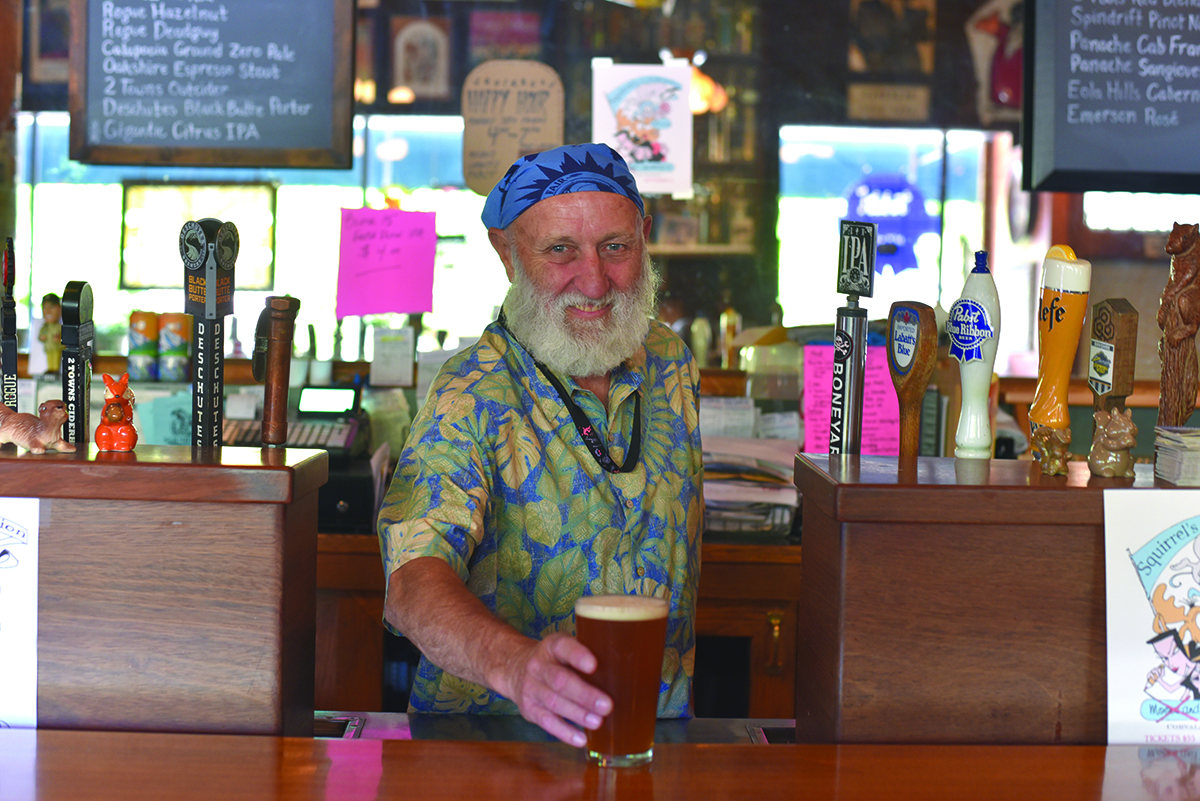 Many food and beverage industry leaders are are College of Business graduates, including Greg Little ’73, owner of Squirrel’s Tavern in downtown Corvallis, and Brendon Gilbert ’09, systems architect with Dutch Bros. Coffee. Little and Gilbert may not recall everything they learned from their business textbooks, but they remember learning the mindset for how to succeed while at OSU.

Little still had a term to go when an opportunity came along in 1973 that he could not pass up. He was recruited to run a downtown bar called Togo’s Too. A year later, he bought out his partner, purchased a building with Oregon State alum John Beardsley and moved to the present location at Second and Monroe and renamed it Squirrel’s Tavern, a nod to the nickname Little picked up for chattering on the sideline when he played high school football. 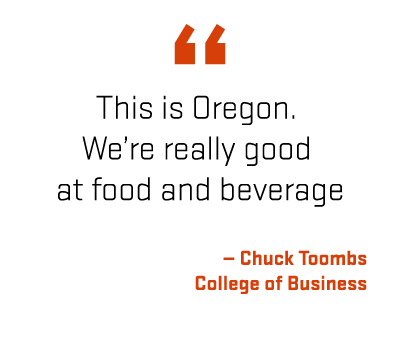 Not only has Little run a successful business for 45 years, but his bar also provided inspiration for some of the legends behind Oregon’s most famous craft brewers. The Widmer brothers, Kurt and Rob, were patrons when they were students at Oregon State before founding Widmer Brothers Brewery, as was Brian McMenamin before he founded the restaurant and brewpub chain with his brother Mike McMenamin. And the late Jack Joyce, who went on to found Rogue Ales, was Little’s lawyer when he incorporated the tavern in 1976.

“We always look to the future,” Little said. “Where do I want to be in five years?”

At age 68, it’s not as easy as it once was for Little to lift kegs of beer. But he is still planning for the future of his business. He recently completed a kitchen upgrade and installed accessible restrooms on the ground floor.

“We’re still trying to adapt,” Little said. “We want to be a place where all are welcome and everybody enjoys themselves.”

Brendon Gilbert ('09), systems architect with Dutch Bros. Coffee, had only planned to study one term at Oregon State after another college plan fell through. But after landing a job at the Dutch Bros. location adjacent to campus and starting his business classes, one term is all it took for Gilbert to discover where he belonged.

After graduating, Gilbert stayed with Dutch Bros., assisting with the launch of a sponsorship of both the Beavers and the Ducks, implementing a dozen in-stadium locations between Oregon State University and the University of Oregon. Then he moved to Dutch Bros headquarters to focus on special projects, including the implementation of Dutch Bros first-ever point-of-sale system. Gilbert now leads research and adoption of new technology for the nation’s largest privately held drive-thru coffee company. His role remains consumer-focused, and what he gained through the case studies in his business classes still applies.

“I learned a ton about teamwork and collaboration, time management, how to multitask—the skills I use on a daily basis,” Gilbert says. “I attribute that foundation to my time at Oregon State.”