A Family's Commitment to the College of Business Grows

A family's commitment to the College of Business grows

R. Stevens Gilley, ’56, first came to Oregon State University as a 17-year-old with the notion to be a veterinarian, but freely admits that he was “not equipped or prepared.”

After attending summer session to improve his grades in physics and chemistry, courses that he had no exposure to during his high school years, Gilley was called to speak to the dean before enrolling in his fall courses.

With a fair share of dread, Gilley went to visit Ag Sciences Dean Frederick Price, and the conversation went something like this:


Dean Price: Steve, sit down, I want to talk to you. Why do you want to be a veterinarian? You’re a kid from Portland, Oregon, right?
RSG: Yes, sir.
DP: You like dogs and cats?
RSG: Not especially, sir.
DP: Do you like cows and all?
RSG: No, I don’t like cows.
DP: Well, what do you like?
RSG: I like horses!
DP: Well, then, I’ve got an idea for you — why don’t you go into business and make money, then buy yourself some horses?

Gilley graduated from the College of Business and built a career in commercial real estate and hotel business that spanned five decades and included leading his own business, The Gilley Company.

As president of the OSU Alumni Association, his continued engagement with his alma mater gave Gilley the chance, years later, to invite Dean Price to his farm for an alumni picnic. “And I had all my show horses there,” Gilley said, “and I told Dean Price, ‘I did what you suggested.’”

R. Stevens Gilley, ’56, first came to Oregon State University as a 17-year-old with the notion to be a veterinarian, but freely admits that he was “not equipped or prepared.” Now, he encourages his grandchildren — and others through scholarships — to fulfill the Beaver dream.

Gilley, who was one of the first donors to the Austin Hall building fund with a classroom in Austin Hall named for his family, has taken the advice of deans once again. Gilley has become one of the early contributors to Dean Mitzi Montoya’s “$20 million by 2020” student success and scholarship fund. 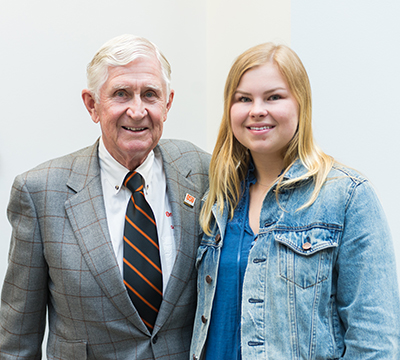 But this time, there is a caveat. He also is heeding the advice of his granddaughter, Emma Gilley, who just completed her freshman year and first year of Innovation Nation, the signature College of Business curriculum and living-learning community designed to immerse and engage students in their business studies.

“Oregon State has meant so much to me. I was treated so well when I was a student. To have Emma here, it means a lot to me,” Gilley said. Gilley watched his granddaughter complete a successful year, and agreed that he’d like to support more students from the beginning. He saw Emma’s success and has additional future Beavers in his family who may benefit.

“It’s been a challenging year with a lot hard work, but I love it, too,” Emma said.

“I understand why, ever since we were younger, he’s always been such a big Beaver. I get it now,” Emma said.

She calls the decision to attend Oregon State the best choice she’s made in her life. Emma, who worked the due diligence step of her grandfather’s donation consideration, reviewed materials sent to him by the college and asked questions at the college about the future of the program.

And, in stride, the college has placed her on the student success and engagement taskforce, as a representative of the student voice in curriculum and experiential learning rollout to second-, third-, and fourth-year students — programs she will experience first-hand as her college career continues.

Emma finally called Gilley up. “Bompa,” she said, using their family name for Grandpa, “this is a great program, let’s do it!”

On the day of his visit to Austin Hall to present a $250,000 check to Dean Montoya, Gilley has, in fact, four grandchildren with him, and they are swarming about him on the tour of the Gilley Family’s dedicated classroom.

It’s pretty clear that their love and respect for their grandfather just might give Steve Gilley continued leverage to build the Beaver clan within his own family. His grandson will start Innovation Nation in fall 2017.

Two other grandsons still have a year of high school to decide.

Would you like to learn more about making a meaningful impact through the Student Success Scholarship Fund? Contact:
Anne Murphy
Senior Director of Development
Division of Business and Engineering
Oregon State University Foundation
anne.murphy@osufoundation.org
541-760-7196