Inara Scott, J.D., takes on big topics. As a corporate lawyer within the energy sector, she tackled sustainability issues. As associate professor in the College of Business, she teaches law and ethics as well as business and sustainability. And as assistant dean for teaching and learning excellence, she promotes a thoughtful consideration of student rights.

As an academic, she looks at controversy, addressing with a lawyer’s logic the sorts of issues that split the country, divide a family at dinner and drive our citizens to the street. Scott researches our country’s long history of religious freedom and its litigation, looking at court decisions that deliver guidance, piece by piece, within the ideological divide. She tackles the protection of religion values in business and the rights of individuals.

Her research examines the complicated questions about the religious rights of both corporations and employees (individuals), and the resulting litigation if these principles clash. The legal decisions then can offer guidance within the ideological divide, and protect religious and secular values in business as well as the rights of individuals. 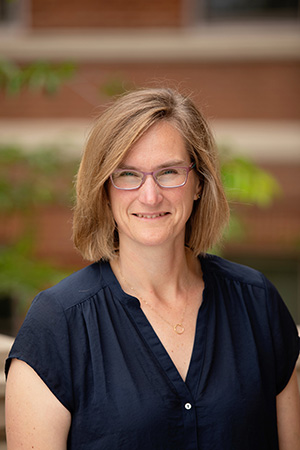 The answers to complicated questions can come from a combination of existing laws and ethical perspectives applied to new areas and social challenges.

If, she says, we live in a society that agrees that a business cannot turn away a customer because of the color of their skin, why, when you can ask the exact question about one’s gender identity or sexual orientation or immigrant status, are we drifting toward different answers?

"We are at an inflection point,” Scott said. “We in higher education do have an obligation to speak up for democracy, to speak up for truth and to acknowledge that we have an important role to play in protecting those things. We are not value-neutral when it comes to truth, and we're not value-neutral when it comes to democracy.”

In R Corps: When Should Corporate Values Receive Religious Protection published by the Berkeley Business Law Journal, Scott lays out a blueprint for decision-making about corporate religious freedom in the aftermath of years of landmark Supreme Court decisions – whether guided by profit or principle.

She brings in diverse voices, from law and society that reflect the contrasting theories of our times, with spiritualist Marianne Williamson lending unlikely alliance to the work of economist Milton Friedman, with the corporate values of Ben and Jerry considered equally to the Hobby Lobby, and with the religious values of the Amish or the Pastafarians weighed against the costs to our social compact.

How does such a cast of characters come together in her research? Scott starts by asking questions.

When should the religious rights of a company’s owners supersede individual rights, and when do a corporation’s values impinge on someone’s religious beliefs? Can corporations invoke religious freedom to defend values such as an embrace of reproductive rights and diversity?

For example, if Burwell v. Hobby Lobby finds that corporations have religious rights that govern the breadth of health care benefits offered to their employees, then how do we govern whether another corporation has religious rights and can find cost savings in employee benefits?

In the end, Scott’s work helps corporations define their religious values and how those values impact their employees.

In Belief v. Belief: Resolving LGBTQ Rights Conflicts in the Religious Workplace, from the American Business Law Journal, Scott gives the legal compass another good shake to create a hierarchy of direction for the rights of lesbian, gay, bisexual, transsexual, and queer/questioning (LGBTQ) employees and customers within the context of the religious beliefs of corporations and their owners.

“This is what makes law really exciting and fun for me because it combines all of these different things,” Scott said.

Fascinating. Complex. And, in the end, clear: Scott creates a pathway for corporations to define their religious values and their scope of impact on the rights and wellbeing of employees.

"I think it's really important that we tee up those questions, so that then we can have the conversation and reach an understanding,” Scott said.

"We are at an inflection point.”