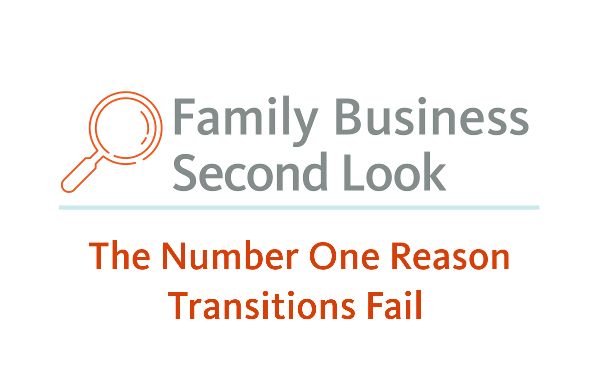 Sound family business statistics are notoriously hard to find. Aside from surveys conducted by industry and consultants, which are good for revealing attitudes and intentions but not so good for identifying causes and effects, few empirical studies have yielded hard data on transition success and failure.

One thing that most scholars and practitioners will agree on is that family business transition and succession is complex. A past review of family business research in 2008 identified 27 separate factors that could prevent successful successions from occurring. They included financial factors such as the inability to find the financial resources to liquidate the exit of heirs, relation factors such as lack of commitment to the potential successors by family members, and individual factors such as low abilities of potential successors (De Massis et al. 2008).

When one particular statistic about family business transition failure captures the spotlight and grows into widespread use, it’s important to closely examine it. This piece looks at a statement that has become commonplace in family business articles and workshops:

The number one reason family business transitions fail is due to breakdown of trust and communication within the family.

Where did it come from, and how do we know?

It was a 2003 book by Roy Williams and Vic Preisser titled “Preparing Heirs: Five Steps to a Successful Transition of Family Wealth and Values” that put the question of transition failure squarely into the spotlight.

In the book, Williams and Preisser summarized the research from 1997 along with their own proprietary project within The Williams Group (a consulting firm founded by Roy Williams in 1964) to make their case.

According to Williams and Preisser, they were able to identify three main causes after studying thousands of family businesses over a 20-year period. The leading factor, accounting for 60% of failures, was the breakdown in trust and communication within the family. The second cause accounting for 25% of failures was “inadequately prepared heirs.” The final 15% were attributed to everything else: lack of estate planning, legal issues, poor tax avoidance strategies, etc. (Williams & Preisser 2003).

The advice then followed: the most important thing a family can do to ensure a successful transition of the business and family wealth is to build a culture of high trust and effective communication within the family unit.

Williams and Preisser summarize two studies that led to their findings.

The first study was facilitated by Williams’ association with TEC International, an organization that connected business leaders into peer groups to help one another solve problems and share ideas[i]. Williams was granted access to survey 2,500 family businesses about transition practices. Williams and Preisser note that over a 20-year period they were able to gather enough data on these families to identify the three failure causes mentioned in the previous section. It should be noted that this study was not peer-reviewed, meaning Williams and Preisser didn’t have the benefit of review and feedback from other scholars before publication.

In 1997 results from a peer-reviewed study were published by three business scholars with Roy Williams as co-author. The paper appeared in the Journal of Business Venturing under the title “Correlates of Success in Family Business Transitions.” The findings were based on the responses of 209 family-owned businesses from the Midwestern United States.

It came to similar conclusions as The Williams Group project; the main reasons family business transitions succeed are in direct correlation with the failure reasons the first study stated. That is, successful business transitions are mostly impacted by the quality of family relationships first, the preparation of heirs second, and the work done to prepare estate and tax plans third. (Morris et al. 1997)

In “Preparing Heirs” Williams and Preisser provide very limited background on their 20-year study of 2,500 family businesses and do not share crucial details on how their research was conducted that would help other researchers validate their findings. They include the source of the families (TEC International family business members), and some general demographic data (generation of ownership, ranges of revenue, range of family size), but little else.

Among other things, it would be useful to know if all of the 2,500 families were asked the same questions over the 20-year period. Were these structured question and answer sessions or written surveys? And what other characteristics did these family businesses have in common that might affect how they responded to queries about success and failure?

Without more detail on the methodology it is difficult to understand just how the results were arrived at. This is unfortunate as it is one of the very few published statistics on failure causes making how it was determined all that more important.

The 1997 study does provide much more information behind the process and methodology of their findings. The researchers outlined their survey methodology, including how they identified family businesses, what types of questions were asked, and how they performed their statistical analysis. Though only 209 family businesses participated, it represented a promising start to studying causes of success and failure in transitions.

Why does it matter?

Succession and wealth transfer may be one of the most important processes that a family business undertakes.There are few other sources of information when it comes to peer-reviewed, empirical research on family business transition failures. Most previous research has been survey or case based, and it is difficult to generalize results to the larger family business population (Bau et al, 2013). When a statistic is put forward that has the possibility to transform how families are advised and affect how they pursue their succession and transition goals, it’s important that the information is built on a solid foundation. Distilling “secrets to success” to a few easily digestible points is tempting, but does not serve the best interests of families facing transition.

In defense of Williams and Preisser, the remainder of “Preparing Heirs” is a thoughtful approach to the complex nature of family business transitions. They have clearly counseled numerous families and their method works for many. It is unlikely they ever intended for “the number one cause of transition failure is a breakdown of trust and communication in the family” to overshadow other important factors of transition success. But over time the allure of a unique and easily quoted statistic grows.

The advice to enhance your transition success rate by focusing on family trust and communication is certainly worthwhile. But with any complex system it shouldn’t be focused on at the expense of other important factors. The best approach for families remains to work thoughtfully with family members, boards and trusted advisors to craft a transition plan that accounts for the complexity and needs in their particular situation.